Australian cricketer David Warner is an out-and-out Indian film buff. The cricketer has often taken to social media, making Reels and TikTok videos on various Telugu and Hindi songs and scenes. His latest Instagram Reel has him channelling his inner Allu Arjun, recreating the actor’s line from his latest release Pushpa: The Rise. David’s act was shared and appreciated by the film’s official Twitter handle as well.

The short six-second video posted by David on his social media has him lip-syncing to a line from the recently-released film and even copying Allu Arjun’s trademark style. The hilarious video not only got attention from fans and David’s teammates but also the official Twitter handle of Pushpa, which reshared it.

David’s wife Candice commented, saying, “You have lost it!!!” while Australian captain Pat Cummins jokingly asked David, “You ok?” Most fans appreciated David’s hero avatar and one even advocated he gets Indian citizenship.

David developed a liking for Indian cinema during his stint with the Sunrisers Hyderabad team in the Indian Premier League. He has developed a large fan following among non-cricket fans with his videos.

In June, David had opened up on his love for India and Hyderabad in a social media post, where he wrote in Telugu, “My second home is still in India, Hyderabad is my favourite place.” Talking about his reason to share these funny videos on social media, David had told India Today, “We have to think out of the box. For me, it was about putting smiles on the people’s faces. Through TikTok, Twitter, and Instagram, my family and I have been able to do that.”

Pushpa: The Rise, starring Allu Arjun and Rashmika Mandana, is among the most successful films of the year. It has already earned ₹188 crore at the box office and is inching towards the ₹200-crore mark. The film is the first instalment in the franchise and a sequel will commence production in 2022.

Get our Daily News Capsule

Thank you for subscribing to our Daily News Capsule
newsletter. 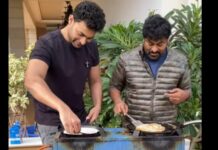 Sai Pallavi calls out journalist for asking an uncomfortable question

Rana Daggubati and Miheeka Bajaj kiss at the mandap in wedding...