Delhi witnessed a much-needed break from the scorching heatwave on Monday as heavy rain poured down in the wee hours in all the cities in NCR. However, the cool wind and a respite from the sun that Delhiites woke up to did come with repercussions. Heavy traffic made commute almost impossible for office-goers, and the strong winds uprooted trees in nearly 44 locations, according to data shared by the Municipal Corporation of Delhi. The mercury dropped to 18 degrees Celcius in several parts of the region, the lowest since 2004 for this time of the year.

Here are 5 things that happened in Delhi-NCR today due to weather:

What is likely to happen tomorrow, the rest of the week:

The weather department has issued a yellow alert for Tuesday and has forecast partly cloudy skies with light rain or thundershower along with gusty winds at the speed of 30-40 kmph. The maximum and minimum temperatures are likely to settle around 34 and 19 degrees Celsius on Tuesday. 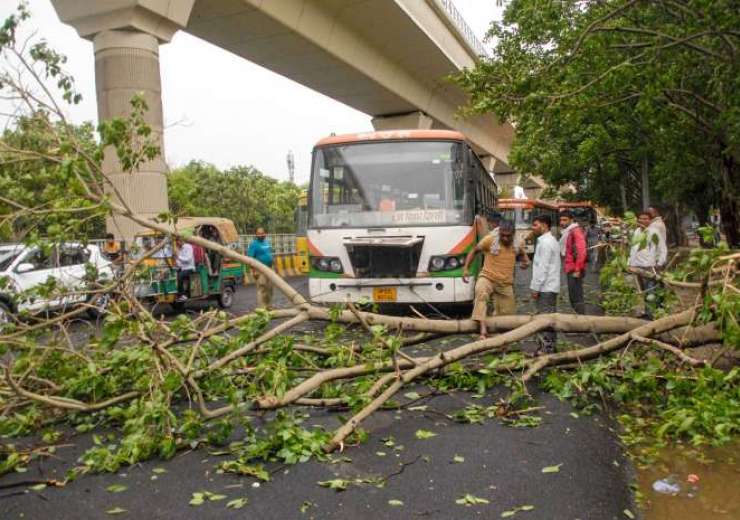 According to weather department, another spell of rain and thundershower accompanied with strong gusty winds (50-60 kmph) is very likely to occur in Delhi-National Capital Region during the night. Similar weather conditions will prevail in Punjab, Haryana, north Rajasthan and west Uttar Pradesh during the next eight to 10 hours. “Hailstorm is very likely in these areas,” it said. Intense heatwave conditions are unlikely to hit the national capital at least for another six days, India Meteorological Department (IMD) has said.

What caused the rains:

The morning weather conditions were caused due to a western disturbance affecting northwest India. There was moderate to heavy rainfall accompanied with strong gusty winds blowing at 80 kmph.

According to the weather department, this was the season’s first moderate-intensity storm. Summer is considered to start from March 1. “Normally, between March and May, thunderstorms occur for 12 to 14 days. But this season saw only four to five thunderstorms and that too mostly dry ones,” the department said. The thunderstorm accompanied with lightning and rain led to a drastic fall in the surface temperature.

Malegon’s Urdu Ghar to be named after Muskan Khan, who shouted...