Royal Challengers Bangalore sealed the final playoff spot in the ongoing IPL season after Delhi Capitals suffered a five-wicket defeat by Mumbai Indians at the Wankhede stadium on Saturday. The runners up of the 2020 IPL edition, Delhi had their qualification fate in their hands but were trumped by bottom-placed Mumbai, who rode on Jasprit Bumrah’s three-wicket haul and Tim David’s quickfire 34 off 11 deliveries. IPL 2022 Live Coverage

Capitals, who were in touching distance of a top-four finish, set Mumbai a target of 160 and looked to be on course for a win, with the five-time IPL winners needing 68 runs in the last six overs. But they paid a big price for captain Rishabh Pant’s DRS howler. In the 15th over, Delhi appealed for a caught-behind for Mumbai batter David but the umpire turned it down.

Pant, however, didn’t opt for a review and was left to rue his decision after replays showed David feathered an edge off Shardul Thakur’s delivery. The moment was the turning point as the Mumbai player, who would have been out for a golden duck, went on to produce a match-defining 34 featuring four sixes and two boundaries.

As Delhi crashed out of the 10-team tournament with a defeat in a must-win game, Pant spoke about his call to not go for the DRS. The wicketkeeper-batter said he felt that David nicked the delivery, but didn’t go for the review as most of his teammates inside the circle were not convinced.

“I thought there was something but everyone standing in the circle was not convinced enough. So I was asking should we go up. In the end, I didn’t take the review,” Pant said in the post-match presentation.

Capitals finished the season with 14 points to remain in the fifth spot, while Bangalore joined Gujarat Titans, Rajasthan Royals and Lucknow Super Giants in the playoffs with 16 points.

On his team’s performance, Pant said the game was very much in their hands but underlined that the execution and planning could have been better. He also admitted that the Capitals were 5-7 runs short of what could have been a winning total.

“I think most of the game we were on top. But on a few occasions when we were on top, we let it slip away from our grasp. That’s one of the things we have been doing throughout the tournament. I think we were not good enough to win this match I guess.

“…at the same time, we could have done better execution, better planning. That’s the only thing we have been missing a lot throughout the tournament. So we have to learn from our mistakes next season and come back as a strong team again next year,” said the 24-year-old.

The left-handed Pant smashed 39 off 33 deliveries while Rovman Powell chipped in with a 34-ball 43 to help the Capitals post a competitive total on the board. Mumbai, however, overhauled the 160-run target with five balls to spare

“I think we were 5-7 runs short. We were not short much. We actually really bowled well throughout the tournament but dew came in on the latter half of today’s match and we missed our execution. We didn’t bowl to our planning. It’s hard but at the same time, we have to take it on our chin and learn from it,” Pant further said. 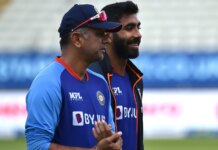