One of the key talking points ahead of the team selection for the three-match ODI series against South Africa was Shikhar Dhawan’s form and whether his poor run in the domestic season implied that the veteran opener had reached the end of the road in his career. However, Dhawan has been handed a lifeline with the selectors adding him to the 18-member squad for the South Africa series, but former BCCI selector Saba Karim feels that his domestic performance was not taken into consideration for his selection process.

Dhawan last appeared in a limited-overs game for India in July, in the tour of Sri Lanka. Despite an impressive performance in the first leg of IPL 2021, a poor return in both the formats in the Sri Lanka tour saw Dhawan miss his place for the T20 World Cup. His form deteriorated further in the second leg of the IPL 2021, in the UAE and then in the Vijay Hazare Trophy as well where he scored just 56 runs in five innings at 11.20 which included a duck as well.

Karim, during a discussion on India News, explained that for a player of Dhawan’s stature, his international performance comes into play for his selection and not his scores in the domestic tournaments.

ALSO READ: “Let’s talk about how to make them the best team”: Chetan Sharma breaks silence on rumoured rift between Kohli, Rohit

The former Indian wicketkeeper also explained that the selectors must have felt the need for the inclusion of Dhawan as he still has the qualities that can help his side. Karim then backed young India star, Ruturaj Gaikwad as a No.3 possibility.

“Here, the selectors feel that Shikhar Dhawan still has the qualities that can help the team to grow. That is why Shikhar Dhawan is still getting an opportunity in this team. There is a strong possibility that Ruturaj Gaikwad can play at No.3 as well.”

Gaikwad has been rewarded for his performance in the Vijay Hazare Trophy where he emerged as the highest run-getter scoring 603 runs in five innings at 150.75 with four consecutive tons.

Get our Daily News Capsule

Thank you for subscribing to our Daily News Capsule
newsletter.

‘If given an opportunity…’: ODI vice-captain Bumrah opens up on prospects of leading Team India in Tests after Kohli

Jasprit Bumrah reveals how Virat Kohli broke the news of stepping down as Test captain to Indian team: ‘We respect that’ 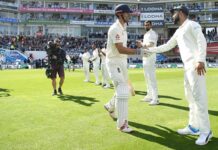 ‘India are ranked No. 1 and so much of that is down to the hard edge he instilled’: Cook pays tribute to ‘captain’ Kohli