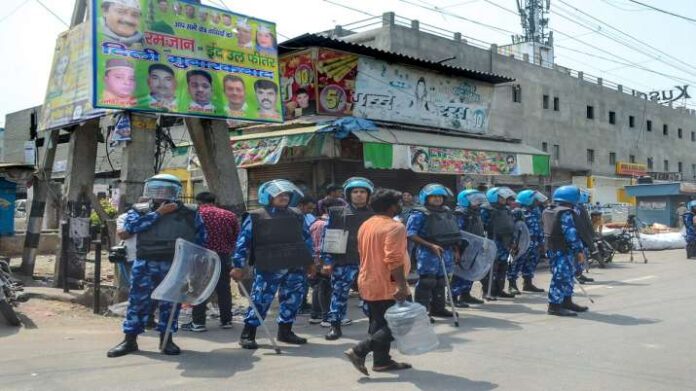 The Aam Aadmi Party has alleged that the BJP was behind the violence during the Hanuman Jayanti procession in northwest Delhi’s Jahangirpuri. The party’s reaction came after Delhi BJP president Adesh Gupta alleged that the violence was the result of the AAP government aiding illegal stay of Rohingya and Bangladeshi immigrants. The BJP leader also alleged that one of the arrested accused in the violence was an AAP activist. Twenty-one people have been arrested in connection with the stone-pelting and arson in which some vehicles were also torched during the clashes between two communities on Saturday evening. In a statement, the AAP said it also celebrated Hanuman Janamotsav and took out a Shobha Yatra (procession) in Greater Kailash which saw “heartwarming” interfaith bonding and respect. The Delhi government also organised recitation of Sundarkand in the Gole Market area later in the day on Saturday, the Arvind Kejriwal-led party said. “Why is it that such violence doesn’t take place in AAP’s events and only happens when BJP organises it?” it asked. The party said that Delhi BJP president Gupta recently honoured and felicitated “eight goons who were arrested for vandalism and hooliganism” outside the residence of Delhi chief minister.