In its latest announcement, the Brihanmumbai Municipal Corporation (BMC) on Wednesday said that Marathi language should be prioritized over others when it came to writing names of shops. BMC has ruled that names of shops will be ‘written first’ in Marathi, and then in any other language.

It also said that letters of Marathi names will be bigger than those of other languages. In another order, BMC said that names of visionary men, and forts shouldn’t be written on nameplates of liquor shops.

Last month, the Bombay High Court refused to quash the Maharashtra government’s order mandating shops and establishments to display their names in Marathi (Devanagari script) language. HC said that the rule was reasonable.

“Marathi may be the official language of the state government, but it is also undeniably the common language and mother tongue of the state,” the HC said.

The attempt to make Marathi a prominent language in Maharashtra in not new. Not long ago, the Maharashtra Legislative Assembly and the Council unanimously passed a bill aiming to make use of Marathi language mandatory in official works of local authorities, including civic bodies and corporations formed by the state government. 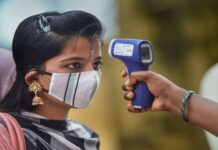