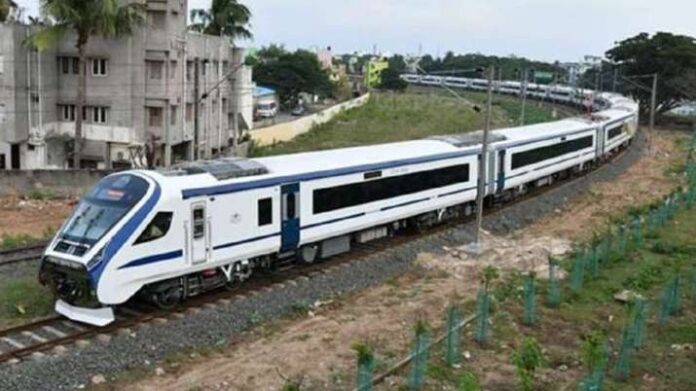 Union Minister of Railways Ashwini Vaishnaw has announced that Vande Bharat Express train will run between Khajuraho in Madhya Pradesh’s Chhatarpur district and New Delhi. Vaishnaw during his visit to the Bundelkhand region of Madhya Pradesh, said that two rake points have been approved at Chhatarpur and Khajuraho.

“Soon Rail Over Bridge /Road Under Bridge (ROB/RUB) will be constructed at important places,” he said while mentioning the operation of Bharat Gaurav trains like Ramayana Express, the electrification of which is to be completed by August.

“By that time, Vande Bharat will also start rolling out. The vision of Prime Minister Narendra Modi’s government is to serve the people and has to be followed in spirit while doing development of the region,” he added.

The Khajuraho railway station falls under the North Central Railway. People visit Khajuraho mostly for seeing the Khajuraho groups of temples and monuments as UNESCO- heritage.

He also said that the operation of Bharat Gaurav trains, like Ramayana Express and others would also be done. Speaking about the redevelopment of Khajuraho railway station, he announced to develop it into a world-class station within short time frame.

In another related development, Vaishnaw said that rail tickets can now be obtained from 45,000 post offices. The scheme was launched in Uttar Pradesh in January with the ticket booking facility available in around 9,147 post offices across the state.

Notably, Finance Minister Nirmala Sitharaman in the Union Budget 2022-23 had proposed the development of 400 new Vande Bharat trains over the next three years.

Omicron scare: UP govt to conduct RT-PCR tests of all passengers...

Two unmanned missions to be launched before flying Gaganyaan by end...