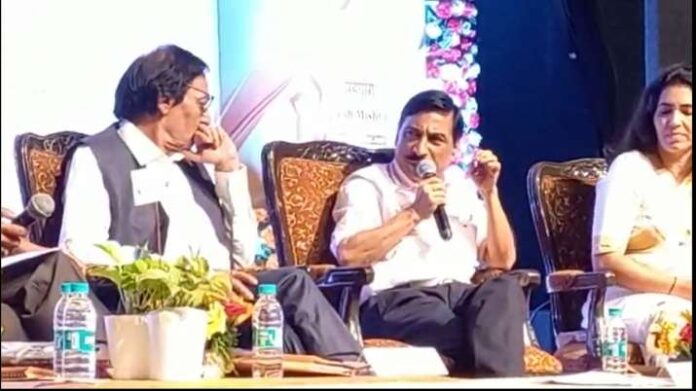 According to the Delhi Tourism website, the 73-metre high Qutab Minar was built with materials obtained after demolishing 27 Hindu temples at the site after the defeat of Delhi’s last Hindu kingdom. The wesbite states: “An inscription over its (Quwwat-ul-Islam Mosque) eastern gate provocatively informs that it was built with material obtained from demolishing ’27 Hindu temples’.”

Qutab-ud-din Aibak, the first Muslim ruler of Delhi, commenced the construction of the Qutab Minar in 1200 AD but could only finish the basement. His successor, Iltutmush, added three more storeys, and in 1368, Firoz Shah Tughlak constructed the fifth and the last storey, according to the website.

“Not one but many idols of Lord Ganesha were found at the site. This was the capital of Chauhan (Prithviraj Chauhan). There were around 27 Hindu temples and Quwwat-ul-Islam Mosque was built on ruins of these temples using the same elements. You can clearly find the evidence through Arabic inscriptions which says that 27 temples were destroyed to build a mosuqe at the site,” said the eminent archaeologist.

The issue is gaining momentum as recently a Delhi court has also directed the Archaeological Survey of India (ASI) not to remove two idols of Lord Ganesha from the Qutub Minar complex here till further directions. “It is directed that status quo be maintained till the next date of hearing,” said Additional District Judge Nikhil Chopra in the order passed on April 13, and posted the matter for further hearing on May 17.

The court passed the order on a suit filed by advocate Hari Shankar Jain on behalf of Jain deity Tirthankar Lord Rishabh Dev, claiming that 27 temples were partly demolished by Qutubdin Aibak, a general in the army of Mohamad Gauri, and Quwwat-ul-Islam Mosque was raised inside the complex by reusing the material. Jain stated that there were two idols of Lord Ganesha, situated in the premises since times immemorial and that he apprehended that the ASI was likely to remove them to one of the National Museums as mere artifacts.

The Vishva Hindu Parishad (VHP) also demanded that the government rebuild the ancient temples at the Qutub Minar complex and allow resumption of Hindu rituals and prayers there. The demands came after a group of VHP leaders, including its national spokesperson Vinod Bansal, visited the compound of the monument which was designated as a World Heritage Site by UNESCO in 1993. “We visited major parts of the site and it was heart-rending to see the condition of the idols of Hindu deities…Qutub Minar was built with materials obtained after demolishing 27 Hindu temples. The superimposed structure was built just to tease the country,” Bansal said. National Monument Authority (NMA) chairman and BJP leader Tarun Vijay had on Thursday said that Ganesha idols were placed “disrespectfully” in the Qutub Minar complex.