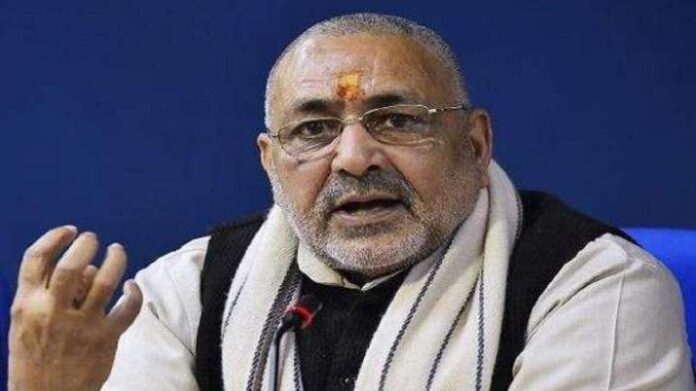 Union minister Giriraj Singh has alleged that the recent attacks on Ram Navami processions at a number of places across the country flew in the face of the “claims of Ganga Jamuni Tehzeeb” (composite culture of India).

The firebrand BJP leader said the country did not object to the construction of new mosques post-Independence and “multifold rise in the population of Muslims” in the country despite large-scale demolition of temples in Pakistan where Hindus faced near-extinction, and warned that “now, patience is running out”.

Singh made the provocative remarks while talking to reporters in this north Bihar district late Monday night. He was venting his spleen over remarks of AIMIM chief Asaduddin Owaisi and “secular politicians with Jinnah’s DNA” that Hindus should avoid venturing into Muslim-dominated localities to avoid communal flare-ups while taking out religious processions.

“Where will Ram Navami processions taken out if not in this country? In Pakistan, Bangladesh and Afghanistan? Had processions of any other faith been attacked leaders like Rahul Gandhi and the ailing (RJD president) Lalu Prasad would have hit the streets for their political tourism,” said the Union minister who remains in news for his acerbic utterances.

Singh, the MP from Bihar’s Begusarai, expressed outrage over incidents like attacks on police officials at Hubli in Karnataka and at Jahangirpuri in Delhi which have witnessed communal violence recently.

He said he was aghast at the incident in Gorakhpur where an IIT graduate charged into the Gorakhdham peeth, a religious institution headed by Uttar Pradesh Chief Minister Yogi Adityanath, and attacked security personnel before getting arrested and booked under the UAPA.

“The country was partitioned in 1947. We must not commit the same mistake again by talking in terms of Hindu-dominated or Muslim-dominated areas.